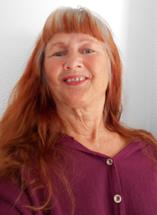 Irene Våtvik was born in 1951 and grew up near the coast in the northern part of Norway. Sickness plagued Irene’s childhood, causing her to be in and out of hospitals until the age of 12. Adapting to a childhood of sickness and isolation, Irene also liked to study people and engage others in role-playing games; she enjoyed making people laugh through her games. This period of frequent isolation nurtured Irene’s imagination, leading her to invent an inner world that would served as a latent source of creativity for her future collage works.

When she recovered and grew older, Irene had developed a deep sensitivity and empathy for people who suffered. A curiosity about the human “inner world” was awakening in her. She would think about human feelings and thoughts, especially that of sick people—how does sickness affect emotion, thought, personality, and one’s relation to other people, family and friends? Irene studied to become a general nurse and then continued on to become a psychiatric nurse and, soon after, a nursing instructor.

In her work, Irene developed a special interest for creative treatment as a method to understand and meet people with psychiatric issues. Parallel with this, and over the course of six years, Irene attended art school part-time where she studied composition, painting, and drawing.

​In 2014, Irene began experimenting with the surrealist art of collage.

This quote encapsulates how I experience my work:
"Art is a marriage of the conscious and the unconscious."
~ Jean Cocteau

Often, I don’t have a clear idea of what to do with the pieces of paper in front of me. I select pieces based on particular elements (shape, color, size, meaning, form, expression, contrast, depth, the paper’s surface) and move them around on a sheet until I find a place where they start living together. Then I continue to put life into the work until it feels finished . . . the experience reveals a result.

I have found that whenever I begin working with an idea already in mind, the piece often evolves into something else through the process, so I prefer to work in the moment—open to use whatever comes to me. I feel deeply connected to nature and its life, so these elements have a big place in my art and heart. But symbols can acquire new meaning in different works—it’s about the total understanding of the result.